Clouds are always challenging in remote sensing unless you are especially interested in clouds and want them to appear in your satellite imagery. How about snow? It is also white and in some cases, without further analysis, it might look like a cloud. So how to differentiate snow cover and clouds in a satellite image?

My area of interest is located in the Alps, near Lake Constance in the border of Germany, Switzerland and Austria. A satellite image was acquired on 17 April 2019, when there is still a lot of snow left in the Alps.

I approached this problem with three different methods:

Let's start and see what kind of results I got by using each method.

First, I tried the simplest method, which doesn’t require any calculations. I started with visual interpretation by looking at the textures of white areas. Puffy white clouds and transparent clouds are easy to recognize. Also, the snow area is easy because the snow cover follows the shape of the ground. However, there are a couple of areas where it is difficult to distinguish between clouds and snow.

Of course, if I had access to a time series from this area, this task would have been easier as clouds are moving faster than snow cover changes. But in this case, I only had one image, so I continued my studies to the next approach: calculating Normalised Difference Snow Index (NDSI).

NDSI is calculated using the bands of green wavelength and shortwave infrared. As a result, it gives an index between -1 and 1. Values near to 1 are usually representing snow. My first challenge was to find the right threshold for separating the snow cover. By trial and error, I ended up with a pretty good solution. But the major issue here is that NDSI cannot distinguish the difference between snow cover and water areas.

I solved a problem of snow cover and water areas by using knowledge of reflectance properties of these two surfaces. I used near infrared band to find out areas with low reflectance because the snow has high reflectance compared to water. Combining NDSI and near-infrared information created a reasonable result.

Now I have the snow cover map and therefore, I know that the rest of the white areas are most likely clouds. I’m still wondering are the white spots over snow cover clouds…? Visually it is hard to tell.

I would still like to have a map showing both clouds and snow areas in the image. That’s why next I tried supervised image classification.

Supervised image classification means that a user selects sample pixels (used as a training data) from the image. Those sample pixels represents the desired classes. I created 7 classes: snow, cloud, transparent cloud, water, shadow, vegetation, no vegetation. I collected 5 samples from each class ending up total of 35 samples.

My main focus was in the classes of snow, cloud and transparent clouds and I show my results using only these classes to make comparison easier.

Last, I tried to combine the enhanced snow cover map and supervised image classification. I masked out snow areas using the snow cover map I created previously. Then I modified my training data by leaving out snow class and after that, I performed classification using k-Nearest neighbors.

This result seemed better compared to previous ones. Now white puffy clouds above Lake Constance were classified as clouds. However, still some city areas and road network were misinterpreted as transparent clouds. Also, some areas above snow cover were classified as clouds (Note that snow cover mask wasn't covering those areas). As I wrote earlier I can't be totally sure by looking at the original image whether they are clouds or not, so the result might be right. After all, I'm pleased with my final result.

The implementation of the latest digital technology is changing the way the forestry industry works. But how do you digitalise a tree? 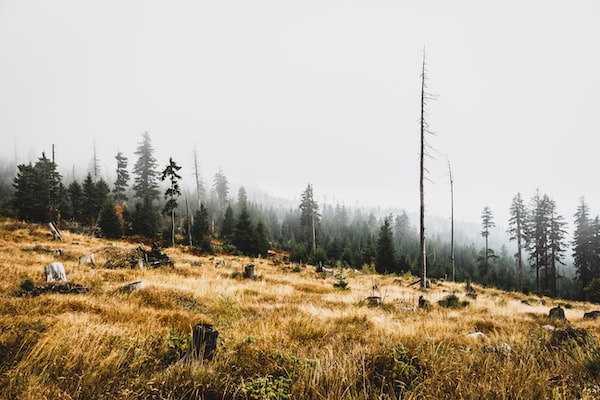